Innovative companies like AKF Analysis & Testing are on the leading edge of technology services to assist building owners in ensuring their mechanical and VFD driven motor systems stay up and running.  They deploy highly skilled and experienced vibration analysts and testing specialists from the best in the industry with members from Local 638 and Local 94 and focus on building operations such as chiller plants, air handlers, pumps, and critical system units.

In the case study which follows you will see how shaft grounding rings were successfully implemented to improve reliability for a New York City landmark building:

Background on the case study below:  In 2007, Tom O’Connell Jr., a partner in AKFA&T, read about the AEGIS SGR Bearing Protection Ring in a magazine and began the process that could eventually end the bearing damage problem at the Time & Life Building once and for all.  He called the ring’s manufacturer, Electro Static Technology, and spoke with Adam Willwerth, the company’s sales and marketing manager.  Soon after, the two met face to face, and O’Connell decided to recommend the installation of a single SGR shaft grounding ring on the most problematic of all the HVAC motors at Time & Life.  Ron Perez, the building’s manager of engineering, consented to the experiment, and follow-up testing showed the ring to be so successful at diverting harmful shaft currents that O’Connell decided to make his company a distributor for the ring.

The full case study is available to read or download: Click here to view.  We have also re-published it in this blog.

Making HVAC fan motors last was the goal for tenants of the Time & Life Building, in New York’s Rockefeller Center: Shaft grounding rings were installed to prevent an on-going bearing failure problem with remarkable success.  Installed in 2008, these motors are still running today!

A preventive maintenance plan that reduces the total life-cycle cost of operations in a prominent building at the heart of New York City serves as a good example of how the push for greater reliability and up-time in building management has led to finding a solution to a chronic, widespread problem with HVAC motors – electrical bearing damage.

The problem is all too common in AC motors controlled by variable frequency drives (VFDs), which are also known as inverters, adjustable speed drives, etc. These drives are widely used because they can save energy, especially in applications with varying loads. Because many centrifugal fans and pumps run continuously, their motors will use less power if the input is modulated by VFDs.  For example, a 20% reduction in fan speed can reduce energy consumption by nearly 50%. With rising energy costs, the use of throttling mechanisms to restrict the work of a motor running at full speed would be wasteful.

However, efficiency alone is not enough if equipment keeps breaking down. That is what was happening at the 48-story Time & Life Building, one of 19 buildings in the Manhattan business and entertainment complex built and partially owned by the Rockefeller Group and known as Rockefeller Center.

More than 100 VFDs control the speeds of the 240 motors that run the building’s HVAC fans and pumps. Unfortunately, a large portion of the savings from these systems has been wiped out by maintenance costs because, in addition to their intended function, VFDs induce powerful, unwanted currents which cause electrical bearing discharges and, ultimately, premature motor failure.

Proper tuning of a drive’s frequency output range and proper grounding of a VFD-controlled motor’s frame are paramount. Only recently has it become clear that without an effective shaft-grounding device as well, stray currents can wreak havoc with bearings, causing premature motor failure. Ironically, some products designed to protect bearings, such as conventional
metal grounding brushes, require extensive maintenance themselves. Others, such as insulation, can shift damage to connected equipment.

For more than 20 years, since the installation of the first modern VFDs, the Time & Life Building’s maintenance department has dealt with chronic motor and bearing failure. At times, the bearing damage had advanced to the noisy stage, at which an unpleasant, high-pitched sound was transmitted through duct-work. Thanks to the efforts of AKF Analysis & Testing, an engineering firm hired by the Rockefeller Group Development Corp. to periodically test and tune (with harmonic filters) the building’s VFDs, the rate of motor/bearing replacements has dropped from 90 to 20 per year, but in today’s economy that is still too costly. Other attempts to mitigate the problem, including the installation of ceramic bearings on some motors, have produced mixed results, usually proving too costly for the meager improvements gained.

THE SOLUTION AT LAST

Late in 2007 AKF Analysis and Testing read about the AEGIS shaft grounding ring and began the process that could eventually end the bearing damage problem at the Time & Life Building once and for all.   AKF A&T decided to recommend the installation of a single shaft grounding ring on the most problematic of all the HVAC motors at Time & Life.  Ron Perez, the building’s manager of engineering, consented to the experiment, and follow-up testing showed the ring to be so successful at diverting harmful shaft currents that O’Connell decided to make his company a distributor for the ring.

It was an unprecedented move.  AKF A&T specializes in vibration monitoring and analysis, acceptance testing, critical speed testing, and motor current waveform analysis for preventive maintenance and energy management on behalf of government agencies and businesses in a multitude of East Coast buildings, including hotels, hospitals, laboratories, and office buildings.

Never before had the company endorsed a particular product.  The whole phenomenon of electrical bearing damage is so misunderstood that some maintenance managers have lost their jobs over it because replacing a fan motor is a big expense.   In an office tower, a motor can be running critical equipment
that supplies air to 30 floors where the tenants are paying as much as $110 a square foot.  They have the right to expect the temperature and quality of their air to remain constant.  AKF A&T was so convinced of the ring’s effectiveness that they recommended it be eventually installed on all HVAC motors in the Time & Life Building and in other buildings for which they have contracts.

Because AKF Analysis and Testing usually visit a client’s building three or four times a year to run diagnostic tests on the HVAC equipment and tune the VFDs, they have seen the progression of motor bearing damage.  Now, the typical procedure is to recommend installation of an AEGIS shaft grounding ring whenever a replacement motor is installed or a motor’s bearings are replaced to ensure that harmful bearing currents have been eliminated and the VFD is running at its optimal performance. 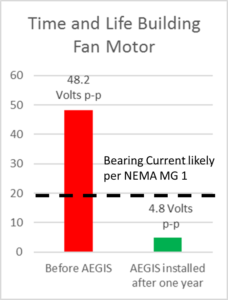 Shaft Voltage readings before and after one year

On February 6, 2008, before the ring was installed on the problematic motor, AKF A&T used a shaft voltage probe and an oscilloscope to measure the discharges from the motor's shaft at 59.2V (peak-to peak) and 37.2V (peak-to-peak), at two different oscilloscope settings (10μsec/ div and 2μsec/div, respectively), for an average of 48.2V (peak-to-peak). The oscilloscope screen showed rapid dv/dt voltage collapse at the trailing edge of the waveform – typical of the electrical discharges that damage bearings. On February 20, 2008, two weeks after the ring was installed, AKFA&T took a ground-reference reading, for baseline comparison, of 9.21V (peak to-peak) with the oscilloscope set at 40ns/div. Minutes later, AKF A&T took two more shaft-current readings at the same setting: 8.86V (peak-to-peak) and 11.2V (peak-to-peak).  A little more than a year later, on March 9, 2009, the motor was checked again by AKFA&T technicians. This time the shaft voltage was even lower: 4.8V (peak-to-peak).  The readings may speak for themselves and the Building engineering manager Perez agrees the ring “seems to have resolved the issue.” Based on the positive results, he has installed AEGIS shaft grounding rings on additional fan motors in the Time & Life Building.

The AEGIS Training Can Now Be Logged in MyNCEES

The National Council of Examiners for Engineering and Surveying (NCEES) is an American nonprofit... 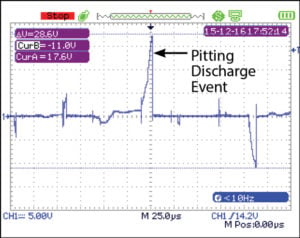 Is Your Motor at Risk of Bearing Damage? Find Out with the AEGIS® Shaft Voltage Tester!

If you are controlling motors with variable frequency drives (VFDs) - aka variable speed drives... 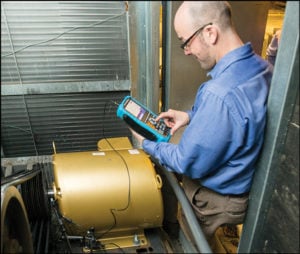 5 Reasons to own an AEGIS Shaft Voltage Tester

Having the Right Test Equipment is the Key to Success when Testing for Shaft Voltages on Electric...