Q1.  I run a motor shop, and we use the SKF discharge detector (TKED 1) to detect bearing current.  It seems to give very variable results.  At what number of discharges per second is there a major problem?  On one motor, I recently measured 6000 in 10 seconds.

With that said, in your example, you were seeing 6000 discharges in 10 seconds: that's 600 per second.  In motors without bearing protection, the average that we see is 1000-2000 per second, so that's relatively mild.

Q2.  The root cause of electrical bearing damage from VFDs is an imperfect sinewave in the drive's output.  In that case, a drive manufacturer/model with the most sinusoidal waveform will have less risk of damage, is that right? 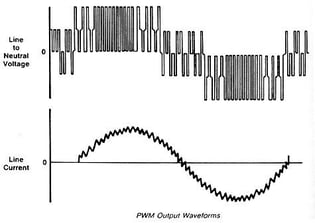 A2.  In theory, yes.  In practice, it doesn't make much difference.  When you hook up a drive's output to a motor, you have current running through the windings.  Windings have high inductance, which actually makes them act like a filter for the current.  So all drives' current waveforms are pretty close to sinewaves.  They still have a lot of high frequency spikes, but there's obviously a sinewave in the waveform.  The current in one phase is shown at the bottom of the first image.

But the motor doesn't filter the voltage.  The voltage waveform still looks like a mess of pulses.  This is shown at the top of the image.  It is those voltage pulses that cause capacitive coupling between the motor's components and produce the shaft voltage that discharges through the bearings.

This will be a problem for virtually all drives.  The one possible exception, that we know of, is matrix drives, which don't include a capacitor bus.  Instead of putting out pulses of constant voltage from a huge capacitor, they directly patch together the three input phases into variable frequency output.  Matrix drives don't give perfectly clean output waveforms either, but they are orders of magnitude cleaner than what you get from a regular drive.

A3.  Sort of.  Load reactors, dv/dt filters, and common mode filters will smooth out the current waveform to some degree.  But they don't much affect the voltage waveform, so you will still have a problem with shaft voltage and bearing discharge.

There are actual sinewave filters out there that will smooth the voltage waveform into a sinewave.  These are mostly used in petroleum and mining applications where the drive is very far - sometimes kilometers - from the motor.  Because they filter the voltage, they're great at cutting down reflected waves, which can kill bearings and motor windings.

But they are expensive, bulky, and hard to find.  They're out there, but there are also a lot of so-called sinewave filters that actually only filter the current.  (Such as the ones in the second image.)  So you've got to know what you're getting.  Read the specs and look at the "before and after" pictures carefully, and make sure that the product does what you think it does.

Or, if you're only worried about bearing damage, not long cable length, etc., you could just play it safe and use AEGIS rings.  You know what you're getting with them.

Unlike most sinewave filters, AEGIS Shaft Grounding Rings come with a 2-year extended warranty against bearing fluting damage.  No other form of shaft grounding offers a warranty like this.

To learn more about AEGIS shaft grounding and best practices for electrical bearing protection, sign up for a training.  We offer monthly live training webinars, and – pandemic restrictions permitting – we can also visit your facility to review your exact application. 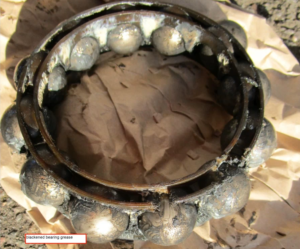 When an electric motor bearing fails prematurely, you should try to determine why it failed.  If... 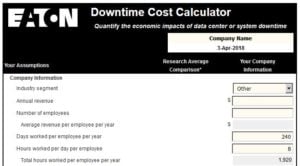 Eaton Electrical published an article today; entitled Downtime can be disastrous.  While the...

Each year, Electro Static Technology recognizes its top distributors of AEGIS® Rings. This is the...