Home » Blog » What Is the Effect of PWM Drives on Electric Motor Bearings?

What Is the Effect of PWM Drives on Electric Motor Bearings? 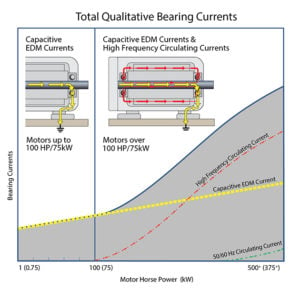 The impedance of the bearing to high frequency discharges is a function of the oil film between the rolling element and the bearing race, load and system design variables, the type of bearing, speed of rotation, and other factors.  The bottom line is that as the shaft rotates an oil film forms between the rolling elements and the bearing race.  This oil film is dielectric and would not normally not allow current to flow.  However, because it is very thin, only 5 to 10 microns thick, when the induced shaft voltage is high enough, [10 to 40 volts peak per NEMA MG1 31.4.4.3] the oil film will break down and allow an arc to pit the motor's bearing. 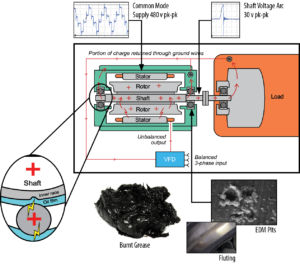 Bearing current is the current that arcs through the electric motor bearings and leads to mechanical damage. This damage is evident from the pits in the bearing.  While the electric motor is in operation, arcing occurs thousands of times per second.  In addition to pitting the bearing, arcing also oxidizes the lubrication, which further decreases the bearing life.

Two potential mechanisms for bearing damage when operating on pulse width modulated variable frequency drives are dv/dt (the change in voltage divided by the change in time), which contributes to EDM currents caused by the parasitic capacitive coupling from stator to rotor, and in larger motors (over 100 HP / 75 kW), the high frequency circulating currents are caused by high common mode current levels. 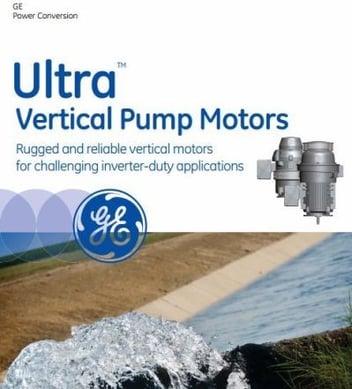 5 Reasons to own an AEGIS Shaft Voltage Tester

Having the Right Test Equipment is the Key to Success when Testing for Shaft Voltages on Electric...

Each year, Electro Static Technology recognizes its top distributors of AEGIS® Rings. This is the...