It seemed as though nothing could stop the squealing. Not that the Monarch Cement Company’s huge ball mill wasn’t already loud. Powered by a 5,000-HP motor, it pulverizes 100 tons of clinker (a burned mixture of limestone and shale) per hour. But the squealing was not what Randy Riebel wanted to hear. As the electrical supervisor at Monarch’s plant in Humboldt, Kansas, he knew the noise meant the motor’s bearings were going — again. In fact, the sound of chronic bearing damage was all too familiar at the plant, which can produce 1,300,000 tons of cement a year. Since 2001, when the ball mill was new, its motor bearings had been replaced three times. 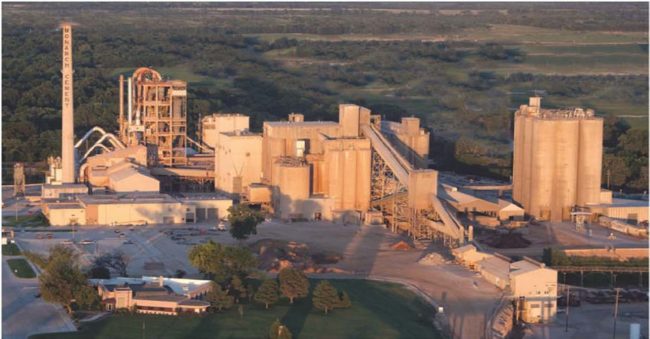 “We kept greasing those bearings, but they kept on squealing,” Riebel recalls. “We weren’t looking forward to another replacement because of all the expense and downtime. It takes at least ten days to pull that motor — we have to hire help, rent a hoist to put it on a truck, and take it away to be rebuilt. So this time [summer of 2009] I decided to try something else.”

The something else was the AEGIS® PRO Bearing Protection Ring, manufactured by Maine-based Electro Static Technology (EST). By safely channeling harmful electrical currents away from bearings to ground, the PRO Ring extends the lives of medium-voltage motors and generators, thus improving the reliability of entire systems in which they are used.

Maintenance-free, the AEGIS PRO Series Rings are ideal for medium-voltage motors that drive pumps, compressors, mixers, shredders, conveyors, and other machinery used in mining, food processing, wastewater treatment, petrochemical refining, and many other high-current applications. Available in many sizes, the PRO Series Ring also protects the bearings of generators in both utility and on-site power generation systems.

Riebel had been discussing electrical bearing damage with Scott Wilkins, manager of motor shop operations for Independent Electric Machinery Company (IEMCO), a Kansas City motor and equipment repair shop. Wilkins recommended the PRO Ring, and Riebel had IEMCO install two of them on the ball mill motor. Riebel chose the PRO split-ring model, which is designed to facilitate field retrofits. The mating halves were installed around the motor shaft without the need to decouple the motor from the mill.

If not diverted, shaft voltages discharge through bearings, pitting the balls and race walls. Without long-term bearing protection, concentrated pitting at regular intervals along a race wall can cause washboard-like ridges called fluting, a source of noise and vibration. The eventual result is motor failure.

Ironically, some products designed to protect bearings, such as conventional spring-loaded grounding brushes, require extensive maintenance themselves. Others, such as insulation and ceramic bearings, can shift damage to connected equipment.

To boost the electron-transfer rate, the PRO’s entire inner circumference is lined with multiple rows of conductive microfibers. Locked securely in the ring’s patented AEGIS FiberLock™ channel, these microfibers surround the motor shaft, providing millions of discharge points for harmful shaft currents and create a path of least resistance that effectively diverts these currents away from bearings to ground. The microfibers themselves are specially engineered for exceptional flexibility to prevent breakage and ensure that the ring will last for the life of the motor. Because it prolongs the life of bearings, motors, and motor-driven systems, the PRO Ring qualifies as sustainable technology under the Federal Energy Management Program.

Contractors and retail home-improvement stores in six Midwestern states depend on the Monarch plant, which sends cement by truck and train to its terminals in Des Moines, Iowa, and Dodge City, Kansas. When Monarch was founded in 1908, chunks of blasted limestone (“shot rock”) up to four feet across were loaded by hand into mule-drawn carts. Now this limestone is moved by huge front-end loaders, 50-ton dump trucks, and conveyors to be processed by a series of computer-controlled crushers, kilns, and mills until it is as fine as face powder.

The problem of chronic bearing damage is by no means limited to the plant’s ball mills. Many of the motors are controlled by variable frequency drives (VFDs), which induce additional high-frequency currents on motor shafts. A fan or pump motor tends to use less power if the input is modulated by a VFD, but the benefits of improved efficiency are lost if the motor keeps breaking down.

Such breakdowns were recurring headaches for Riebel, but because the two rings installed on the ball-mill motor were effective, he later had IEMCO install the solid PRO Ring on nine more motors that had to be removed from service. It is now Monarch policy to add the ring in the shop whenever a VFD-controlled fan motor is overhauled.

One example was a PRO Ring installation on the 2,250-HP motor for an induced-draft (ID) fan that pulls kiln-heated air through a roller mill, to dry the limestone and shale during the raw grinding process. Other motors that now have PRO Rings include four at the plant’s kilns, where the air is forced in and out: two 2,000-HP ID fan motors and two 1,000-HP bag house (dust-collecting) fan motors.

Using a probe and oscilloscope, Riebel periodically checks the motors’ shaft voltages. He is pleased with the results because the readings are low, indicating that the rings are providing long-term bearing protection that reduces downtime and maintenance costs.

“So far, so good,” he says. “On the 5,000-HP, since the last set of bearings only lasted a year, chances are we would have noticed problems by now, but we haven’t had any — no squealing.” 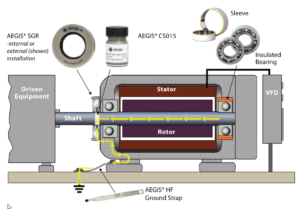 Part 15 in a series of questions and answers from our Q&A webinars. 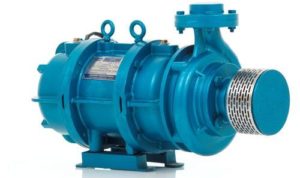 Part 18 in a series of questions and answers from our Q&A webinars. 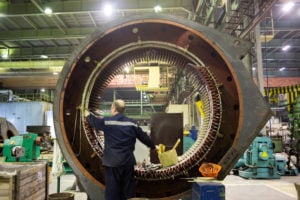