Container port cranes need to be strong enough to lift several tons.  But they also need to have enough finesse to lift and lower these huge loads smoothly, without too much jerking.  This makes these cranes good candidates for control by dc drives.  Drives allow constant torque at all speeds, and relatively smooth acceleration and deceleration.  These benefits come at a price, though.  Drives can destroy the bearings of the motors they control, as one Long Beach crane owner learned all too well.

This company did business at the Pacific Container Terminal, where it had 10 cranes, each able to lift 50 tons.  Each crane had two 650 HP dc motors to raise and lower the massive loads.  And each motor was plagued by chronic bearing failure, at about one failure every month or two.  Every time a bearing failed, the 8-ton motor would have to be removed and sent off for 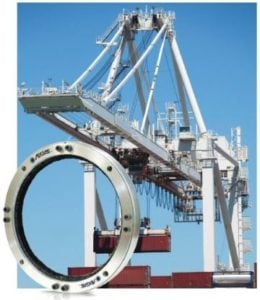 repair.  On top of the repair costs, each removal also cost 16 hours in downtime.

Reed Electric & Field Service, the company that did the bearing replacements, determined that the failures were caused by stray currents.  The drives were inducing a voltage onto the motor shafts, and that voltage then discharged by arcing through the bearings.  Over time, the scars from these arcs roughened the smooth bearing surface, causing friction and further damage.  But knowing the cause did not cure the symptom.  First, Reed Electric tried installing carbon brushes, to no avail.  Next they tried installing an insulated bearing in each motor.  But when they insulated one bearing of a motor, the other would get damaged instead.

Finally, they hit on a solution:  The AEGIS PRO ring.  The PRO ring surrounds the shaft with millions of conductive microfibers, providing low-resistance paths from shaft to ground.  Shaft voltage dissipates harmlessly through the ring before it can build up high enough to arc through the bearing.  (They also installed an insulated bearing opposite the AEGIS ring to interrupt any circulating currents that might occur.)

After an AEGIS ring was installed on the first motor, the crane team waited to see what would happen.  One month passed.  Then two.  When three months had passed - longer than any motors had survived in years - they knew they'd got done it.  And from then, they began installing PRO rings on the remaining 19 motors.

Reed Electric's field service manager summarized:  "We used to pull the motors out every one or two months.  To date, we have installed the AEGIS ring on six motors, and we haven't had a single problem with any of them since.  We're going to keep using the PRO ring because it's working.  It's really doing the trick."

This case study is based on a previously published article.

AEGIS Rings - both PRO Series and SGR Series - also come with a 2-year extended warranty against bearing fluting damage. No other form of protection against VFD-caused bearing damage offers a warranty like this.

To learn more about AEGIS shaft grounding and best practices for electrical bearing protection, sign up for a training. We offer both live webinars and on-site lunch-and-learn trainings.

In its long history, Marathon Motors has seen some changes. When they produced their first washing...

Westinghouse Electric is one of the best-known and longest-lived brands in the world.  Westinghouse...