Home » Blog » The USA's Water Infrastructure Will Be Getting A Boost

The USA's Water Infrastructure Will Be Getting A Boost

One of the few things that all American politicians agree on is that our nation's infrastructure needs repair and updating.  Our Federal government recently translated that conviction into action, and passed the America’s Water Infrastructure Act of 2018.  The bill was signed into law in October, and it will increase Federal investment in water and wastewater infrastructure from roughly $2 billion per year to over $7 billion.  The new law will also make it quicker and easier to secure funding for and begin construction on water infrastructure projects. 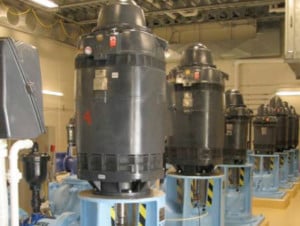 As a case in point:  Many water processing plants will install variable frequency drives (VFDs or inverters) to control their pump- and HVAC-driving motors.  VFDs can save enormous amounts of energy in pumping and blowing, because the motors do not normally need to be running at full speed.  Instead, VFDs can tune the motors' speed and torque to use only as much energy as needed.  They can save up to 30% compared to running a motor on mains power.  And 30% of a water plant's electric bill is a lot.

So installing VFDs to drive motors would be a pretty smart idea.  Those savings could be used to lower consumer utility rates or to finance more smart improvements in the future.

On the other hand, VFDs have their quirks, too.  Their output power consists of pulses, instead of the smooth sine wave of power you get from the mains.  These pulses are hard on electrical insulation, so you can't run just any motor on one of these drives.  Motor manufacturers are very aware of this problem, so nowadays, most new motors are "inverter ready" or "inverter duty," and have winding insulation tough enough to stand up to VFD pulses.

But insulation isn't the only thing VFD output can chew through.  Their voltage pulse can also cause electrical arcing through the motor bearings.  Over time, this roughens the bearings and causes friction, heat, and eventual failure.  At that point, any processing that depends on the failed motor must stop, and either the bearing or the entire motor must be replaced.  The costs of repair/replacement and downtime very quickly eat into what you saved by using a VFD in the first place.

Luckily, there is a solution to this:  The AEGIS® Shaft Grounding Ring.  The AEGIS ring gives electricity a low-resistance path between the motor shaft and frame, so instead of arcing destructively through the bearing, current travels harmlessly through the ring.  One AEGIS ring is enough to protect one motor's bearings, as well as whatever equipment it's coupled to.  (Motors over 100 hp also require one insulated bearing, at the opposite end from the AEGIS ring.)

For a case study on a water treatment plant that encountered the problem of VFD-caused electrical bearing damage, and solved it with AEGIS rings, click here. 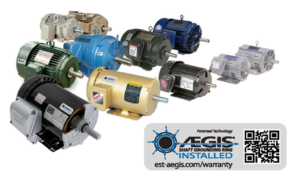 AEGIS grounding rings can be installed on new or in-service motors.  And a large and growing number of motors are available with AEGIS rings factory-installed.  These include general purpose and C-face motors from ABB Motors & Mechanical (Baldor), Marathon, and WEG; GE Ultra and US Motors Holloshaft vertical hollow shaft motors; and washdown duty motors from LEESON, as well as offerings from TECO, Toshiba, and many others.

What's more, AEGIS Shaft Grounding Rings come with a two year extended warranty against bearing fluting.  No other bearing protection product offers such a guarantee.  For more on the AEGIS warranty, see here.

Ultimately, a VFD driving a motor with AEGIS shaft grounding is not just an upgrade, but an investment, one that will more than pay for itself... making the next round of upgrades that much easier. 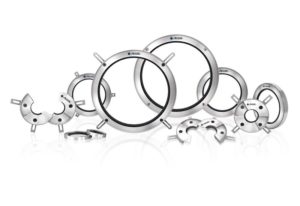 In 2016, a midwestern American university had a problem.  Their HVAC motors running on variable... 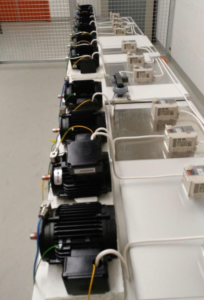 In 2017, the School of Engineering at Zurich University of Applied Sciences (ZHAW) began a...

In 2009, the city of Hutchinson, Kansas opened its new Reverse Osmosis Water Treatment Center.  The...